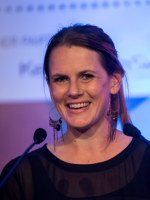 Senior Legal Counsel for transport energy company Z Energy, Kim Beech plans to use a $5,000 scholarship to further her interest in health and safety law.

In May, Ms Beech was awarded the money after being recognised as the 2016 MAS (Medical Assurance Society) Young In-House Lawyer of the Year.

Kim Beech was admitted in September 2007 after studying and gaining her law degree at the ‘Scarfie Capital’ of the South Island, the University of Otago.

Ms Beech’s legal career began at MinterEllisonRuddWatts, before embarking on the great overseas experience or OE.

“I was in their property team for a few years before leaving for Canada where I took a break from law, worked in an adventure sports store and did a lot of skiing and spent as much time as I could exploring the incredible Canadian outdoors,” she says.

When she returned to New Zealand, Ms Beech took on work as a lawyer at the Environmental Protection Authority where she remained for about a year.

She kept moving forward and has now been with Z Energy for over three and a half years.

A key part of her role that she’s passionate about is workplace health and safety.

“So my plans for the scholarship while still a bit loose are to attend an overseas conference with a focus on health and safety, perhaps in Australia or further afield.

I’d like to deepen my knowledge of this area of law and given Australia’s health and safety laws are similar to New Zealand, there are things we can learn from how they are being implemented. But in saying that I’m also keen to see what other countries are doing so my options are open at this stage,” she says.

Ms Beech says New Zealand’s track record for health and safety is poor, and she wants to make a material contribution to improving that. There is much to be learned from other jurisdictions.

Kim has played a critical role in in Z Energy’s preparation for New Zealand’s new health and safety legislation (The Health and Safety at Work Act 2015, came into force in April 2016, and more information can be found here).

Kim has worked with the business to help Z Energy develop a thorough understanding of the new law. She is now recognised as a HSSE legal expert within the business, and also plays a key role in HSSE governance as the secretary for the Board HSSE Sub-Committee.

But like many in-house lawyers, Ms Beech provides advice on a wide range of legal issues.

“I’m a bit of a generalist really. Our business is wide and varied so I can be advising on anything from front line issues for our retail service stations, sustainability initiatives, to supply chain negotiations and how we interact with our competitors,” she says.

Recently Ms Beech was seconded to the project team working on the company’s acquisition of the shares in Chevron New Zealand which was a $785 million dollar deal.

“This was a fantastic opportunity for me both personally and professionally. Now that the deal has been completed I am really enjoying working with our new Caltex colleagues and am excited about the many opportunities that this deal brings for our organisation.”

Kim Beech grew up on a high country farm in Marlborough but life is in Wellington nowadays where she and her partner can usually be found spending their weekends in the outdoors mountain biking and tramping.