NZLS CULTURE AND SYSTEMS CHANGE SYMPOSIUM 14 MAY 2019 – WHO WILL OWN IT?

150 odd people from within the legal profession and beyond were invited by NZLS to Pipitea Marae in Wellington to a culture and systems change symposium.

Who went along on your behalf? I was invited as your representative voice. Other in-house colleagues were there too. Grant Pritchard from Spark, who has created a mental wellbeing movement from scratch at his workplace, came along.  So too did Gabrielle O’Brien, our executive manager and a number of senior legal officers from our government agencies such as MBIE, Department of Corrections and many others.

I’m telling you this so you know that the in-house voices were many and were there on your behalf.

The day was quite structured and began with a rousing speech by Tiana Epati. Click here to watch the video.

How was the day run? The day included some workshops such as the following:

This involved small group discussions on understanding the problem, causes and effects, the underlying history, beliefs, and values to identify.

What contributes to our culture

A group exercise to understand the effects of individual actions on wider group culture.

This was the most curious of all. A jazz trio arrived and set up in the middle of the room. A double bass player, a saxophonist and a drummer. The facilitator asked them to do a few different things:

An intriguing and unusual exercise but one which did get the point across. That our profession (and any other for that matter) needs diversity of thought, gender, viewpoints, ethnicity and ages to offer a rich, complex offering. That leaders can change but the message or direction needs to be the same. That people in a team need to know what they are doing and why. The jazz musicians knew that their parts amounted to a well-played and pleasant piece. The same goes of any group, team or organisation.

We were then invited to contribute to a vision statement that the working group of culture change had drafted. Just imagine around 150 lawyers with marker pens and a ‘mark-up’ to do. Yep, they got down into the weeds!! However, it came with some specific recommendations on how to get from ‘orange’ to ‘blue’, that being the intention I suspect.

Among other contributors, the one that had the most effect on me was a couple of young, female junior lawyers who spoke to the room with a clear call to action. This was a little bit heart-breaking to be honest. They candidly spoke of the continuing pressures and poor experiences of our young entry level colleagues. Long hours resulting in less than minimum wages being paid, junior colleagues being threatened by clients and being supplied with a security escort to and from the office (without time off or counselling offered), sexual misconduct and bullying. It’s still happening and seems that the Dame Margaret Bazely report has fallen on deaf ears in places or perhaps worse still, not even been read.

THE TAKEAWAYS FROM ME

So what did I, as one of your representatives, take away from this for you? Well I’m on the fence to be honest. The day had clearly been well thought out and planned and a huge thank you to NZLS staff who clearly put a great deal of effort into that. However, there were few opportunities (at least in my view) of trouble-shooting ideas and tangible actions to be put forward by the attendees themselves.

I was heartened by the fact the symposium has taken place. However, some of the advice from a panel discussion, that those who create toxic cultures should be ‘bypassed’ or managed out of an organisation, seemed to miss the point. Change does not equate to disposing of people or fighting past a toxic colleague. It requires a change from the ground-up but more importantly from the top down.

One of our speakers at the ILANZ conference the week prior spoke about toxic workplaces and culture. Grevis Beard is director of Worklogic, an Australian entity that conducts workplace investigations into misconduct and bullying. He also runs ‘fix your team’ programmes at those same places, so can talk of successes as well as problems. He outlined the current wave of millennials and Gen Y members of the workplace will not tolerate the ‘command and control’ model. They will not just put up and shut up. They do not expect to work within a regressive model that ‘it happened to me when I was your level so just get on with it’.

His key message? An organisation’s leaders have to OWN IT. They have to own that fact that it is up to them to effect change, improve experiences and not tolerate poor behaviour.

Who will own the culture and systems change for our profession? I admit that I couldn’t quite work this out from the day at the Pipitea Marae. We were all there in a voluntary capacity to discuss the change, but it wasn’t clear who owns the action items and the outputs to make the change happen, to monitor it is happening and to ensure it is embedded.

Is it NZLS on our behalf as our regulator? Is it the organisations themselves? Is it the Big Law firms?

That remains to be seen. In the meantime, I’ll keep a watching brief and contribute on your behalf to the conversation where I can. 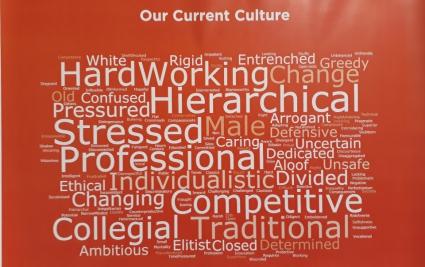 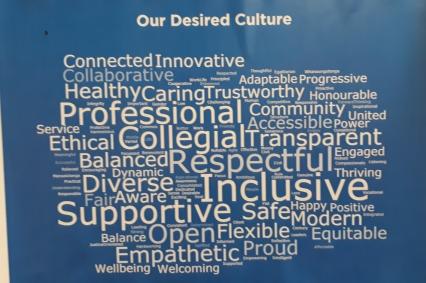