A DIFFICULT CONVERSATION OR A SIMPLE ONE? 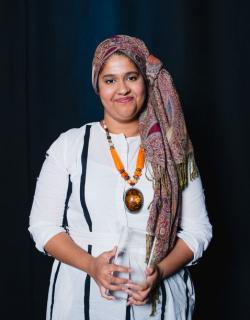 Where the line is drawn between ‘right’ and ‘wrong’ is sometimes very very clear.

The murder of people at prayer based on their faith or their colour is wrong. This we know. This is not a grey area. It is an unequivocal act of terror and hatred.

However, sometimes those lines between what is right or wrong can be opaque for some. For others, the line is completely invisible with a complete lack of awareness that a daily prejudice is wrong. Plain and simply wrong.

Pakeeza Rasheed is an inspiring lawyer, mentor, writer and social leader.  In 2018 she won the ILANZ AUT Law School Community Contribution Award for her work as Chairperson of the Khadija Leadership Network and sits on the board of the Human Rights Lawyers Association as well as being an Associate of the Island Rights Initiative (a not-for-profit that works with small island nations on human rights issues).

Pakeeza and I chatted about such ‘opaque areas’ that non-Muslims may frequently find themselves in where they display what to a Muslim is overt prejudice. Yet this may not be obvious to the non-Muslim.

I asked for some examples to help our community learn where that line is crossed.

Example 1: Pakeeza told me that within our own ILANZ member community, she has had people tell her that she needs to take ‘that thing’ off her head in order to be accepted or successful within the industry. The ‘thing’ is her hijab which she wears with pride and deference to her faith. This is a positive, strong outward expression of her faith that she has chosen to wear.

Example 2: Pakeeza was candid about the lack of opportunities. She has been told by recruiters that they would not be able to help her because her openly wearing the hijab meant she would never be a suitable candidate for legal roles. She is fully aware of fellow Muslim professionals who keep quiet about their faith as they feel it will hinder their career progression and so the cycle continues. This is sadly not a scenario from the past. This is something that is happening now. Pakeeza explained that post 15/3 Muslims have been actively seeking her counsel as they grapple with questions about their faith and Muslim identity.

Example 3: Pakeeza then went on to explain how the (un)conscious bias about Muslim women that choose to wear the hijab runs deep. Engaging with people over the phone or email is an interesting one. Upon meeting her in the flesh and seeing her display her Muslim faith, she has been told quite openly that she ‘is not what they expected’, that she is ‘surprisingly’ eloquent, refined in her speech and clearly well educated. Some people seem almost perplexed by it. She was not what they expected because of an underlying prejudice that as a hijab wearing Muslim woman she must somehow be uneducated and oppressed. This ignores that Muslims, like all humans, are complex individuals.

The above are a mere three examples of hundreds.

We discussed how there needs to be action within our community here in New Zealand and beyond. We chatted about what that action might look like.

Pakeeza explained that understanding your sphere of influence and your personal capacity for change is key. What can you do to actively encourage and nurture true diversity within your circles? How open are you to listening to uncomfortable truths and exploring your biases? Non-Muslims need to know what to look out for in themselves and others.

The only call for action in this piece is to read, digest and reflect. If we know what ‘wrong’ looks like, it’s easier to avoid it or call others out on it. My conversation with Pakeeza was, as always, a simple, engaging and educational one.